As there were 9 neighbouring countries affected by cyclone in North Indian ocean .

Hence the 9 neighbouring member countries i.e Oman, Pakistan ,Bangladesh, India, Maldives, Myanmar,Sri Lanka and Thailand were requested to submit a list of 10 names by end of 2000 ,to be assigned to each cyclonic storm that would rage the country in the upcoming years.

At the 2001 session, the rapporteur reported that of the 9 countries involved, only India had refused to submit a list of names as some controvery had arised due to social dogma about assigning names to tropical cyclones.

The naming lists were then completed in May 2004, after India submitted their names, however the lists were not used until September 2004 when the first tropical cyclone was named **Onil by RSMC New Delhi.

The name **Nilam was contributed by Pakistan, the next in line were

**Mahasen (from Sri Lanka) and

The list of names India has added to the database includes Agni, Akash, Bijli, Jal(cyclones which have all occurred since 2004).

The Indian names in the queue are Lehar, Megh, Sagar and Vayu, while those suggested by Pakistan include Nilofar, Titli and Bulbul ! 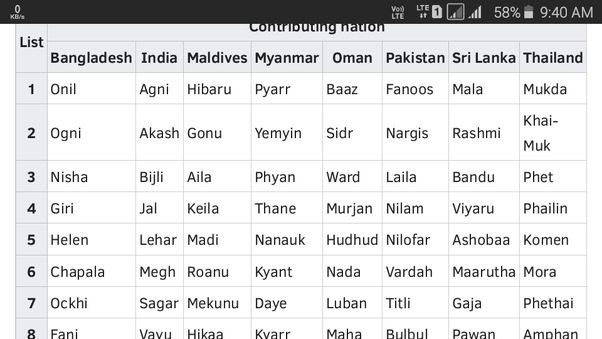 Hence every future cyclonic storm is pre-named . You cant predict when next storm is coming . But when it comes you can know what it will be named before hand .